The Becoming: Ground Zero, the second book in the Becoming series, is now available for purchase in eBook format from Amazon.com! 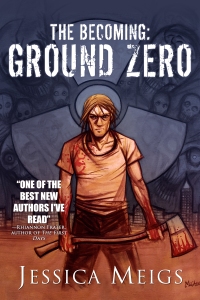 One year after the Michaluk Virus decimated the southeast, Ethan Bennett and his six companions have become as close as family while facing the trials of living in a drastically changed world. Then a mysterious woman arrives at their safe house in Alabama, pleading for assistance in getting into Atlanta. Despite their suspicions that the woman is hiding important information, Ethan and his friends agree to help. But when they’re suddenly forced to flee from the infected, the cohesion the group cultivated is shattered.

As members of the group succumb to the escalating dangers on their path, new alliances form, new loves develop, and old friendships crumble. In the face of unending horror, one man makes the ultimate sacrifice to save his friends, while another reveals secrets that could hold the key to humanity’s survival.

Ready to purchase? You can pick up The Becoming: Ground Zero for your Amazon Kindle eReader for only $7.99 right here!